Major Sporting Events (MSEs) are collective celebrations of human achievements and a source of pride for those who participate in them or host them. In recent years, the range of countries which have been prepared to organize an MSE has extended across all continents. Satellite-supported live television has broadened the number of spectators to hundreds of millions of people. This allows an organizing country or city to place itself, as it were, on the mental map of global audiences. This, in turn, can bring increased tourism, new or improved infrastructure, foreign investments as well as other benefits to those countries which manage to successfully showcase a major sporting event.

However, if the organization is below the standards expected by athletes and the public, this might project a negative image of the country to the world. There are also external factors which can harm the image of an MSE and the way it will be remembered – its legacy. This could be prompted by a breakdown in security caused by an external threat: a terrorist assault or a criminal cyberattack, to name but two major risks.

With this in mind, the Guide on the Security of Major Sporting Events: Promoting Sustainable Security and Legacies contains an exhaustive analysis of all elements for consideration by key decision-makers when it comes to security at MSEs. Consistent with the relatively recent democratization of the access to organize and host MSEs outside traditional regions, this Guide is published in a context where the net is cast wider for those cities and countries looking to host MSEs. Intercultural and cross-regional complexities and particularities are dissected, providing a systemic overview of the main considerations for key decision-makers for the security elements of MSEs.

The Guide represents a cornerstone of the security component of the Global Programme on Security of Major Sporting Events, and Promotion of Sport and its Values as a Tool to Prevent Violent Extremism, and its aim to protect major sporting events as a common good of the international community.

The generous financial support of the People’s Republic of China, through the United Nations Peace and Development Trust Fund, the State of Qatar and the Republic of Korea has made possible this publication. 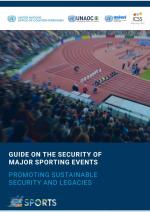