Since 2012, Mali has faced significant instability, increasing episodes of violence and ongoing tensions generated by separate but interlinked issues, including scarcity of resources, longstanding intercommunal tensions, poor governance and weak provision of services. In such a context, various armed and terrorist groups have established their presence in Mali, initially in the north of the country but with a clear shift towards the centre and the south in recent years. The institutional fragility, increased availability of weapons, effects of climate change on a traditional pastoral and agricultural economy, porousness of borders, and existing forms of informal trade have facilitated dangerous collaboration between terrorist and organised crime groups. Their presence has progressively exacerbated tensions among different ethnic groups and communities, as demonstrated by a serious upsurge of violence and ethnically targeted killings in central Mali.

Young Malians are among the most affected by the precarious situation. The general sense of insecurity and instability, exacerbated by a lack of economic opportunity, limited mobility and poor governance, have created an environment adverse to psycho-social and economic development. As a result, Malian youth are at heightened risk of engagement with criminal and violent extremist groups that seek to disseminate extremist beliefs and tap into existing grievances to gain new recruits.

While Malian youth are among the primary victims of terrorist groups’ expansion, they can also play a vital role in the development and implementation of long-term solutions to the current crisis. National and international actors that want to support young Malians and encourage their contribution to building a more peaceful society should first understand how youth are impacted by the violent extremism that they witness first-hand. Listening to their views, creating space for their voices, and showcasing their experiences, as the United Nations Interregional Crime and Justice Research Institute (UNICRI) and the International Centre for Counter-Terrorism – The Hague (ICCT) have done through this report, help reinforce this new generation’s role as the main driver of positive change in society.

Tackling the challenge of violent extremism, not only in Mali but across the globe, requires a comprehensive, whole-of-society approach grounded in supporting local actors and communities to address not only the effects of violent extremism, but also its root causes. Youth can and must play a vital role in this process. 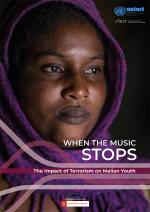