At the peak of the attacks in 2015, the United Nations Independent Expert (UNIE) on the enjoyment of human rights by persons with albinism, Ms. Ikponwosa Ero received reports from civil society of over a hundred attacks during this period. According to the UNIE, the number of attacks must be even higher than the reported ones, as there is no systematic mechanism to facilitate the monitoring and reporting of such cases. The UNIE also states, that whereas physical attacks against persons with albinism, including kidnapping and trafficking in body parts, have been reported in the majority of the provinces of Mozambique, Zambezia seems particularly affected. She also states that, although adults are also targeted, it is children who appear to be the majority of victims.

Several studies, cited throughout this report, exist about persons with albinism in Mozambique. Most of them are of a sociological and anthropological nature, looking mainly at myths, beliefs and witchcraft practices or studies that focus on trafficking in persons (TiP). However, there is no comprehensive study providing wide-ranging information on socio-political and socio-cultural beliefs that cause the discrimination of persons with albinism and which examines the everyday life situations and challenges, human rights violations, including TiP, that persons with albinism are experiencing. 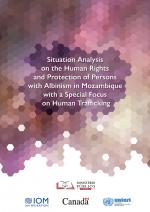