This report is part of a series of studies launched by the European Union (EU) and UNICRI in order to shed light on the significant damage being caused to States as a result of unchecked illicit financial flows, and on the significant value of prioritising the capture of illicitly-obtained assets.

Organised crime produces significant amounts of illicit revenue and proceeds globally and in Europe. Despite the fact that the overall crime rate in Armenia is lower than many Western European countries, the country’s strategic location at the crossroads of Europe, the Middle East and Asia is attractive to organised criminal groups. Key areas of concern identified in this study include money laundering, drugs and human trafficking and corruption. Transparency to promote the integrity of public sector and an increased focus on the seizure, confiscation and recovery of illicitly-obtained assets, are therefore essential.

Despite not having yet established a dedicated Asset Recovery Office (ARO), Armenia has made major improvements in terms of complying with the FATF Recommendations. The country has in fact several subdivisions and independent bodies which are in charge of combating organised crime, money laundering or the financing of terrorism. Many efforts are still required by the international community and an increased focus on the seizure, confiscation and recovery of illicitly-obtained assets is essential. As IFFs in developing countries, such as Armenia, mean fewer hospitals, schools, police, roads, pensions and job opportunities, reinvesting recovered assets into high-priority development needs is key to improving overall socio-economic development.

The Study is available in Armenian and English. 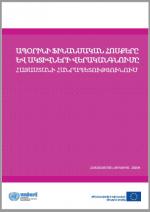