Azerbaijan’s strategic position is particularly attractive to organised criminal groups motivated to carry out smuggling operations and other illicit activity.

Azerbaijan’s crime areas of priority concern include drug trafficking, human trafficking and migrant smuggling, and the smuggling of counterfeit goods.

In light of the above, the European Union (EU) and UNICRI have launched a series of studies shedding light on the significant damage being caused to States as a result of unchecked IFFs, and on the significant value of prioritising the capture of illicitly-obtained assets. The EU and UNICRI are committed to providing key support in creating and implementing more effective responses. States will be able to weaken the influence of organised crime, as well as inject significantly greater funding into high-priority development needs. 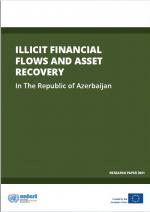