Organised crime produces significant amounts of illicit revenue and proceeds globally. Ukraine has implemented numerous measures to combat corruption, organised crime and Illicit Financial Flows (IFFs) in the country, providing a positive example for the region. Despite this progress, Ukraine still deals with active criminal networks inside and outside the country and remains a transit country for traffickers and launderers.

The principal criminal activities in Ukraine include illicit drug trafficking, human trafficking, exploitation of natural resources, illicit arms trafficking, cybercrime and tax evasion. Additionally, Ukraine faces Russian military aggression, which is causing a large economic burden; the conflict is perceived to be a contributing factor for organised criminal activity. Combating organised crime and IFFs, and recovering illicitly-obtained assets, requires multiple policy areas and transnational cooperation. Ukraine has invested in measures to combat the nexus of corruption, organised crime and IFFs, although events in 2020 and 2021 have created significant political tension.

While there is a specific agency – the Asset Recovery and Management Agency (ARMA) – with a key role in tracing illicitly-obtained assets and managing recovered assets, additional measures are needed to ensure greater transparency and independence of this and other agencies, particularly on the sensitive issue of seizure and confiscation of large amounts of assets linked to criminal activity, and on the issue of transparently channelling such recovered assets to high-priority development needs.

While Ukraine is undergoing significant economic reforms, substantial development challenges persist, including in the education, health, agriculture, and infrastructure sectors. Improving mechanisms to seize and confiscate illicitly-obtained assets will contribute to such development initiatives, and may significantly improve the quality of life of many Ukrainians. 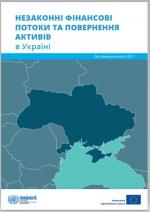