The Deutsche Gesellschaft für Internationale Zusammenarbeit (GIZ) and the United Nations Interregional Crime and Justice Research Institute (UNICRI) have launched an insightful study on Illicit Financial Flows (IFFs) and Asset Recovery. This study sheds light on the significant damage being caused to Tunisia as a result of unchecked IFFs, and on the significant value of prioritising the capture of illicitly obtained assets linked to such IFFs.

Organised crime produces significant amounts of illicit revenues on a global level. Tunisia's economy suffers greatly from IFFs. It however ranks relatively low on criminality, with terrorism and its financing and human trafficking and smuggling being the most substantial criminal activities in the country. Among other consequences, terrorism has a detrimental impact on tourism, which makes up for a big share of the country's GDP. While Tunisia is increasingly investing in the security sector, this might also mean that the country's is disinvesting in other key development sectors such as education, healthcare and infrastructure.

On this regard, the report highlights key sectors within Tunisia that could benefit if the country were to prioritise the capture of only 10% of the millions that are lost annually because of organised crime and IFFs.

Despite the many efforts made by Tunisia towards improving its strategies for the fight against terrorism and its financing, and, more in general, towards combating organised crime and IFFs, key challenges remain. Some key recommendations to policy makers are provided at the end of this report.

The GIZ and UNICRI are committed to providing key support and expertise needed by States to more effectively respond to IFFs. In creating and implementing more effective responses, many of which are identified in the recommendations of this report, States will be able to simultaneously weaken the influence of organised crime and corruption, while also injecting significantly greater funding into high-priority development needs. 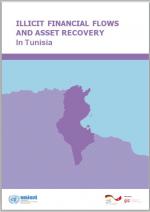