Within the framework of the European Union Chemical, Biological, Radiological and Nuclear Centres of Excellence (EU CBRN CoE) initiative, the United Nations Interregional Crime and Justice Research Institute (UNICRI) is pleased to announce the signature of a Memorandum of Understanding (MoU) between UNICRI and the Government of Uzbekistan for the establishment of the EU CBRN CoE Regional Secretariat for Central Asia in Tashkent, Uzbekistan.

The Signing ceremony took place on 18 May on the margin of the European Union-Uzbekistan Cooperation Council in Brussels, Belgium. It involved the signature between UNICRI's Director, Mr. Jonathan Lucas and the Minister of Foreign Affairs of Uzbekistan, H.E. Mr. Abdulaziz Kamilov. The official opening ceremony of the Regional Secretariat in Tashkent, Uzbekistan, will follow in the coming months.

The EU CBRN CoE Initiative aims at strengthening regional security by sharing good practices and capabilities, developing guidelines as well as identifying and deploying resources to respond to the needs identified by partner countries and to support the development of national CBRN policies. The CBRN CoE Regional Secretariats, which are hosted by one country in each region, play a major role in developing a high level of cooperation and coordination between countries in the region and within the overall EU CBRN CoE network.

The EU CBRN CoE initiative currently involves 51 countries in 8 regions of the world (African Atlantic Façade; Central Asia; Eastern and Central Africa; Gulf Cooperation Council Countries; Middle East; North Africa; South East Asia; and South East Europe, Southern Caucasus, Moldova and Ukraine). Currently four countries are partner of the Initiative in Central Asia, namely Afghanistan, Kyrgyzstan, Tajikistan and Uzbekistan, although other potential partner countries in the region have shown interest in joining the Initiative and it is hoped that participation in this region will expand in the near future.

The EU CBRN CoE Initiative is funded by the European Commission and implemented in cooperation with the United Nations Interregional Crime and Justice Research Institute (UNICRI) and the European Commission Joint Research Centre (JRC). The European External Action Service is also involved in the follow-up of the initiative. The initiative is developed with the technical support of relevant international and regional organisations, the EU Member States and other stakeholders, through coherent and effective cooperation at the national, regional and international level. The initiative involves 50 countries in 8 regions of the world. 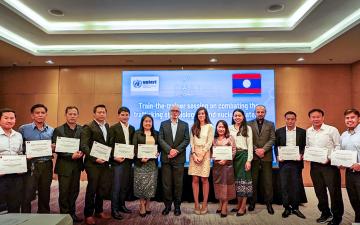 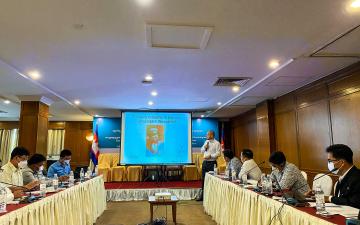 Chemical, Biological, Radiological and Nuclear National Action Plan of the Kingdom of Cambodia
Putting Biosafety and Biosecurity under the Microscope: Elements for an International Approach to Reinforce Capabilities and Address Future Risks
Towards the Preparation of CBRN Legislative Action Plans in South-East Asia