Ms. Smith will succeed Jonathan Lucas of Seychelles to whom the Secretary-General is grateful for his dedicated service and commitment to the United Nations.

The Secretary-General is particularly appreciative of Mr. Lucas’ exemplary leadership in the implementation of the Institute’s mandate during a very challenging period.

Ms. Smith has a wealth of experience in the field of criminology and justice issues, policymaking and education. She is currently Senior Coordinator for International Programs in the Office to Monitor and Combat Trafficking in Persons at the United States Department of State.

Prior to that, she was a Lead Foreign Affairs Officer at the Department of State (2011-2012), Associate Professor in Criminology at the University of Baltimore, United States (2008-2010), Chief of the International Centre at the National Institute of Justice in Washington, D.C. (2005-2008) and Associate Professor and Director of the Masters Criminal Justice Program at the University of Baltimore (2000-2005).

From 2005 to 2006, Ms. Smith was a Fulbright Senior Researcher in Turkey. Her research has covered a wide range of topics related to criminal justice, including juvenile justice, corrections, human trafficking and gender issues in courts. 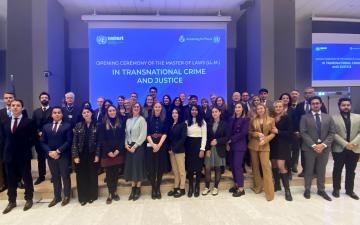